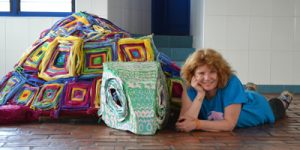 I returned a few days ago after five exciting weeks in Ghana, most of it focused on Osu Children’s Library Fund’s 25th anniversary celebration. It is hard to believe that we started in 1990 with only a few children and a basket of books. Now our network extends to eight community libraries – including two with full stages and auditoriums – in the Greater Accra region of Ghana, with countless smaller initiatives beyond its borders.

The highlights were definitely our two parades. On November 14th, 300 participants enthusiastically walked and danced 10 km from fishing village to fishing village along a coastal road starting from the Goi library.

On November 21st, 750 children, literacy students, librarians and their families, along with our loyal tradesmen, joined us for the parade in Accra. A few walked the full 25 km (beginning at 5:45 a.m. from our Madina library) with the rest joining us at the 10 km mark at the Nima Centre. Drummers provided a good beat and music blared from a truck followed by excited participants, including many wearing decorated hats and carrying hand-made placards promoting reading and libraries (one read “Reading is sweet” on a pineapple-shaped card). Literacy class students proudly wore their own papier-mâché masks made for the occasion.

Becky Elisha, one of the six children who started with me 25 years ago, was among the participants. She is now a university graduate and a teacher. As we were approaching our final destination in the heat of Ghana’s scorching mid-day rays, I asked her if she enjoyed the parade. Her response was, “Every minute of it!” Another member remarked that “It was an exercise in a life time.” It certainly was for me.

As well as the parades, a talent show and quiz along with an essay competition marked the anniversary, both initiatives of the local organizing committee. Moreover, my son, Alastair, along with his partner, Stephanie Morin-Robert, gave two one-week-long theatre and dance workshops at two different libraries. Jibril, a workshop participant, wrote, “It was a unique privilege to learn from ‘Agile Alastair’ and ‘Stupendous Stephanie.’ My only regret is it did not last longer.”

The Canadian High Commissioner generously hosted an evening reception to honour our anniversary milestone. Board members, senior library staff and ambassadors from other countries graced the occasion.

In addition to the jam-packed anniversary celebrations, we held Grandfathers’ Day in Goi on November 24th that was patterned on our very successful Grandmothers’ Day a year ago. Thirty-five grandfathers turned up at the appointed time (more followed the next day!) and they sat proudly as their grandchildren performed and read out stories, including some in their local language. Sally Bleecker, a returning volunteer from the Ottawa area, was among the Goi staff to host the occasion.

At our annual librarians’ workshop in November, we launched Nana and Me, featuring text I adapted from stories the children had written about their grandmothers with charming watercolour illustrations by Edmund Opare.

Finally, I also had the great pleasure of handing out 55 “library-in-a-bag” gifts (each containing eight story books, a towel and a bar of soap) to deserving children. Michael, the son of a taxi driver, was one of the delighted and proud recipients. Each Saturday, he and his siblings come to the library for the whole day. His father comes by at noon to bring their lunch. For many like Michael, our libraries become their second home.

Yes, it was a full and memorable visit! Deborah Cowley, a long-standing volunteer and now Chair of the OCLF Board, and my husband, John, were there to join in with the festivities (and logistics!).

At this time, I want to thank you for your continued support. Your generosity and encouragement makes it all possible. I wish you very best wishes for this season of joy and peace.