I returned to Winnipeg a week ago, and Vivian Amanor, our librarian from the fishing village of Goi, followed a few days later after spending a week in Ottawa visiting past volunteers and sharing her story. She also took part in a presentation by OCLF for Ottawa area donors and friends.

This trip to Ghana, like all others, was filled with special events, visits to libraries and meetings with officials. 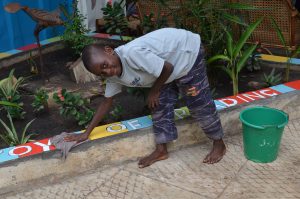 The libraries were especially full during this period because the children were on their Easter break. At our “mother library,” the one built from a shipping container, the children were often waiting at the front gate before the librarians arrived. They were quick to offer their services to sweep the compound in preparation for the library to officially open. One young boy named Tutu eagerly wiped down all the mosaic-tiled surfaces each morning to clean the dirt left behind by neighbouring hens. 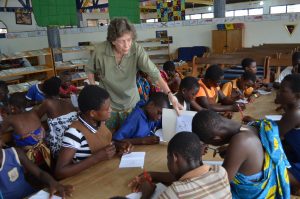 A highlight was receiving Joan Rankin, an award-winning illustrator from Johannesburg, South Africa, who came to understand the subtleties of Ghanaian culture in order to accurately illustrate Vivian’s new story Princess Abena and the Magic Plant. She watched a play performed by the children of Goi that told the story and then spent the remainder of the week doing creative art workshops for children and adult learners in three different libraries. She believes that everyone is an artist if given the necessary skills.

Joan taught the adult learners how to make colourful collage covers for their “life story” books. They took this task to heart. I read a story by David Anankaning, a farmer who has come to our free literacy classes for seven years. It was eight type-written pages long, and he told me that it was only the beginning. The ability to record one’s life story for family and future generations represents a legacy that only the tools of literacy can offer. 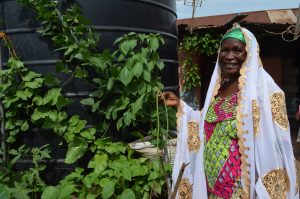 Nothing inspired me more than meeting Mariam, the President of the Nima Mothers’ Club and a former member of our literacy class. She exudes confidence with the conviction that their new project – Nima Green Movement – has the possibilities to transform their community. She and her team have introduced urban gardens to 250 homes in a community where, according to Mariam, “even finding a place to put one’s head is a problem.” She and her team use empty rice sacks and a growing medium of compost, sand and wood shavings to grow a myriad of vegetables and herbs. This month they held a hands-on workshop for our librarians which included a tour of a few urban gardens; seeing is believing. We are very keen to support this outstanding initiative and are giving our librarians the materials to start gardens in their own homes and libraries.

The Government of Ghana changed political parties as an outcome of their December 2016 elections. This resulted in the appointment of Mohammed Adjei Sowah as the new Mayor of Accra. Because Osu Children’s Library Fund has always worked in close partnership with the City of Accra, I was pleased to meet him in his office. He told me more than once that the City was most grateful for our efforts to offer library services for its citizens. His personal assistant subsequently spent a full day touring five of our six libraries within the boundaries of the Accra Metropolitan Assembly. 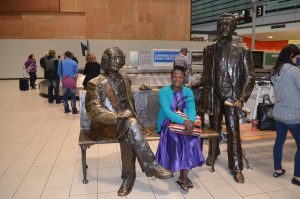 Vivian arrives at the Ottawa airport!

Last weekend Martin Adjei Legend, our Theatre Director, left for Cape Town, South Africa to attend a 10-day international theatre program. He told me that his roommate was going to be from Cuba. How wonderful!

This week we heard that OCLF was one of six organizations out of a total of 31 submissions short-listed for the  inaugural Systematic Joy of Reading Award . It is an honour to be recognized by an international jury. The winner will be chosen on June 13, 2017.

Vivian is taking each new experience in stride. This week we will be driving to Brandon, Manitoba, to share her experiences from Goi and to meet other Canadians involved in development. I am most grateful to those generously hosting Vivian and showing her the Canada that she has only heard and read about. So far she calls Canada a “Place of Magic.” This is a fitting tribute for a country now celebrating its 150th anniversary.